“Some are true links courses, set in windswept dunescapes that rival those of Great Britain and Ireland in both size and spectacle. Others are heathland or parkland courses, including several designed by Golden Age luminary Harry S. Colt. And then there are the more modern layouts from contemporary designers, including Kyle Phillips and Dutchman Frank Pont, both of whom have also had a hand in restoring some of the Netherlands’ best-loved courses.”

“Many of its brawny holes feature crowned greens, often elevated, that test your skill with approach and recovery shots all day long.”

“There are numerous false fronts, swales, pot bunkers, and challenging angles to negotiate. One highly memorable hole is the 15th—a par four that doglegs over/around a towering sentinel dune.”

“Courses that are often compared to English standouts Sunningdale and Swinley Forest.”

“The golf course itself is really a restoration of the landscape—the historic landscape.” 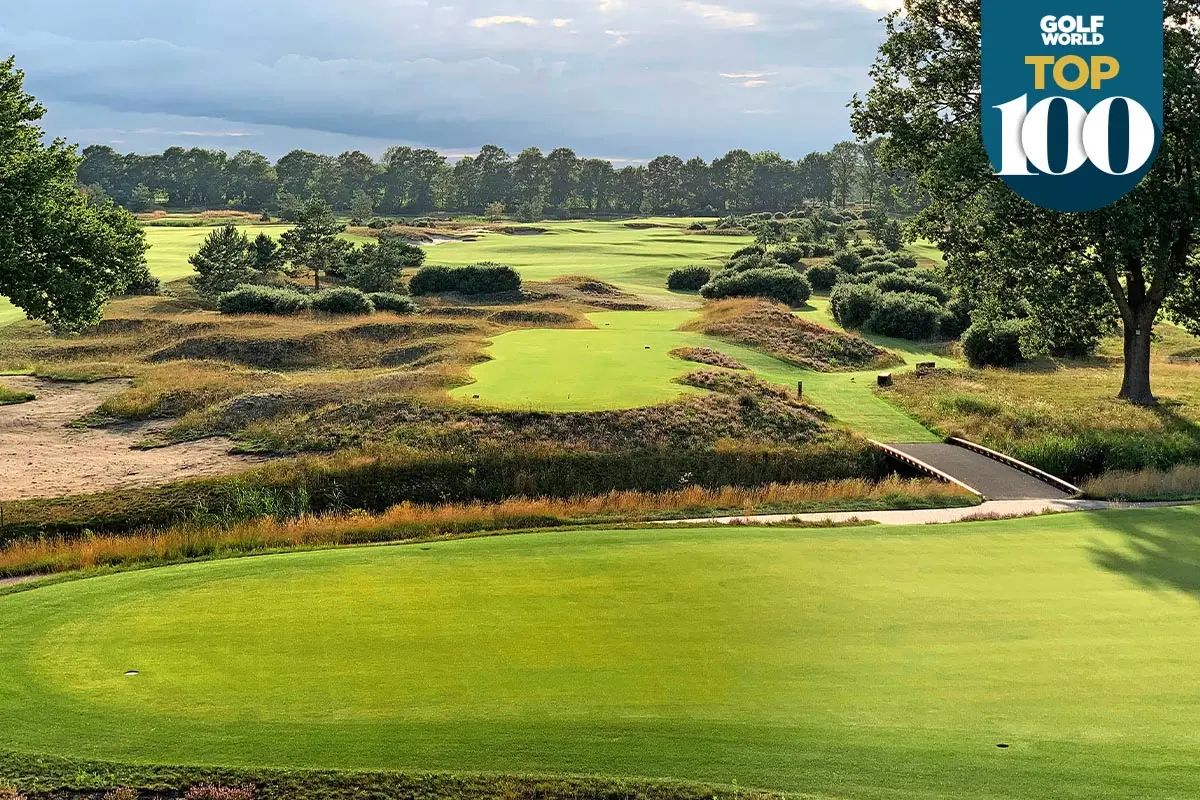 2 (2) De Pan – No.2 again for ‘De Pan’, but what a runner-up it is. It’s superior to courses that have held the honour of being our No.1 – all of whom are now behind it in our list – but has the mighty Morfontaine ahead of it, and that’s a significant hurdle to overcome. As the marks confirm, this Harry Colt heathland is by clear distance the No.2 and closer to the top spot than third. Heather, pines, gorgeous turf that is sandy and firm… De Pan has a tangible ‘glad to be alive’ feeling. The routing and individual holes are Colt at his best. De Pan is a traditional club but is a welcoming one, and that means with a bit of advanced planning you can enjoy this masterful heathland for yourself.

4 (13) Haagsche – A course that bears the Dutch master Harry Colt’s name but where his associate Charles Alison did much of the work – and which has now been restored by Frank Pont. So what can you expect? A seaside course that is demanding to all who tackle her, whether that be long game or short game. Beautifully presented with panoramic views from fairways that rise and fall to a surprising extent – this is the supposedly flat Netherlands, after all.

9 (6) Kennemer – The work of Harry Colt and Frank Pennink squeezes into our top 10 at a time when it has never been more competitive. Hillier than some classic links – which the panel welcomed – and some woodland framing, so this is a distinctive, traditional seaside course presented as it should be.

27 (27) Eindhovensche – A notable position for Eindhoven; this is the first time it has been ranked above one of the three seaside courses in the Netherlands in our ranking. This heathland is all about fun. Playable, varied and always interesting, don’t expect this to be a one-off top 30 slot. This is an effortlessly charming course.

28 (9) Noordwijkse – Some question Noordwijkse’s fall in the ranking over the last decade, but our panel feel it needs a thorough not superficial overhaul to reach its full potential. The seaside holes could be absolutely spectacular, the woodland ones need a lot of tree management. It really could be wonderful.

31 (24) Hilversumsche – The most stringent of the Dutch heathlands we feature, Hilversumsche was modernised astutely by Kyle Phillips in the past decade. It’s characterised by exacting two-shot holes, this is a course to play off a suitable tee to get the most from it; do that, and you will lap up its pine, heather and sand.

33 (51) Rosendaelsche – A fixture in the top 40 of our ranking since we made an all-encompassing trip to the Netherlands in 2016. Anyone who doesn’t think this is one of the continent’s Top 100 courses won’t agree with us on courses a great deal. New holes have blended in well and this is simply a high-class heathland.

56 (-) Bernardus – A magnificent piece of work by Kyle Phillips on what we know was an average piece of land. Phillips – who has the two at Verdura plus significant work at Valderrama, Penha Longha and Hilversumsche to his name on the continent – has really worked some magic here to produce a course already rated so highly by us. Bernardus has a wonderful landscape character. In time, it could develop into a proper heathland and is well on the way already. The grasses and textures are wonderful, and the course plays as hard as it looks. The setting and climate are different, obviously, but it is a lot like Yas Links in the challenge it sets. A notable new entry to this seriously competitive list of continental Europe’s best golf courses.

69 (-) Swinkelsche – Frank Pont’s name appears in this ranking several times for his skilful restoration of classic courses. Here he demonstrates he is also adept at creating fine new courses. The site did not do him many favours, but Pont has produced a thoughtful and engaging experience in an unfussy manner. 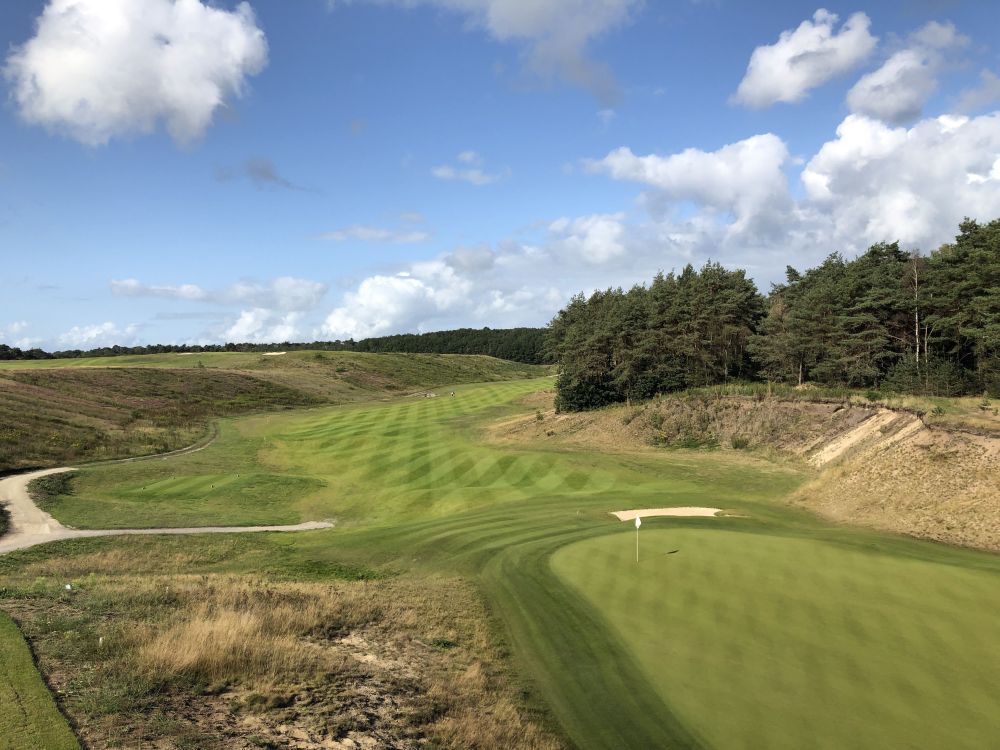 “Expert’s take: Situated in an old sand quarry in De Veluwe, the largest heathland area of the Netherlands, this undulating course features height differences of more than 20 yards, something that is quite unusual for courses in the Low country.

Because it took nearly 15 years to secure permits for design, the design team (led by Frank Pont) took years to refine the somewhat complex design concept of a reversible course, following an idea proposed by Tom Simpson some 90 years ago.

The course is a mix of bold landforms, (re)developing heathland, natural sandy waste areas and raised greens sporting mild contours surrounded by lots of short grass. Very few bunkers were used, mostly because they were not needed. Strong emphasis is on the ground game, which works well because the course plays very fast and firm.”

“Expert’s Take: One of the oldest links courses in the Netherlands, situated in the narrow dunes of the province Zeeland.

The layout is understated, following a classic out-and-back routing, where especially the outgoing holes provide the most classic experience playing through, among other things, bomb craters of WWII.

Course is a mix of classic and modern design elements; I would like to see it become more old fashioned again.” 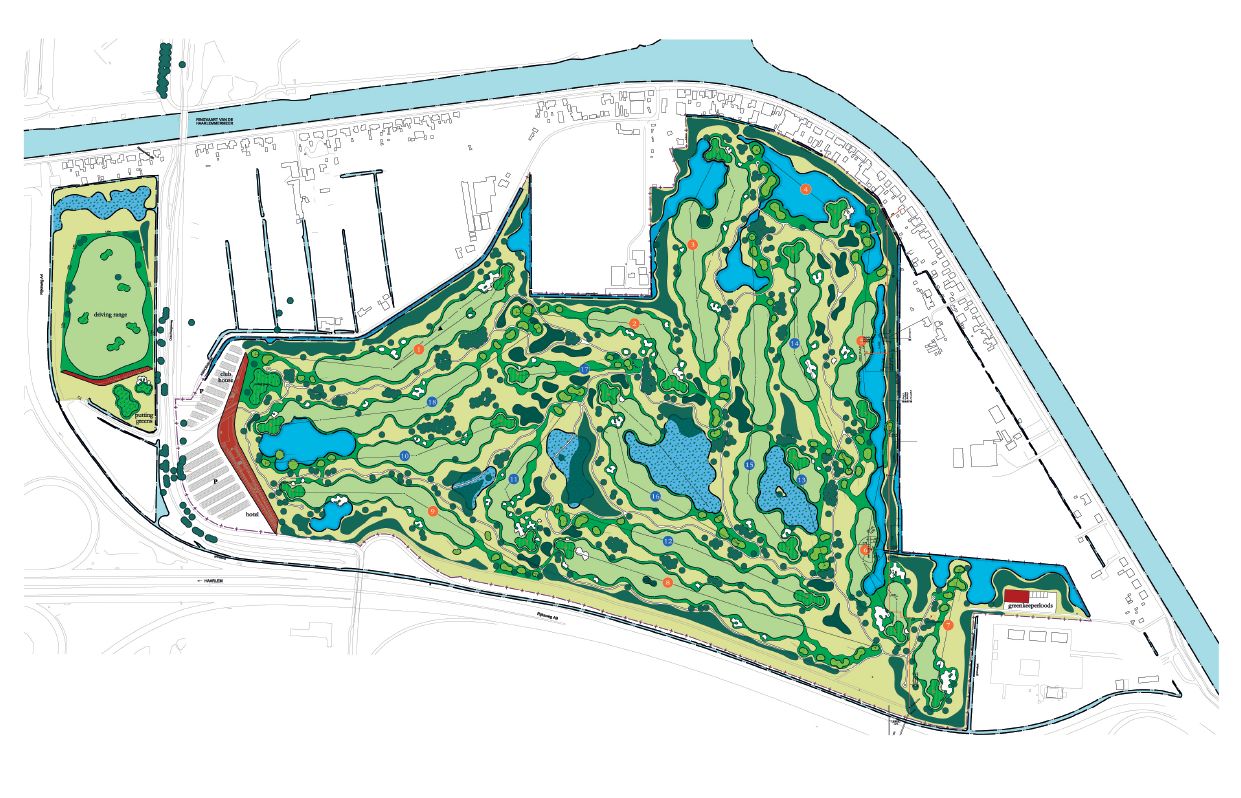 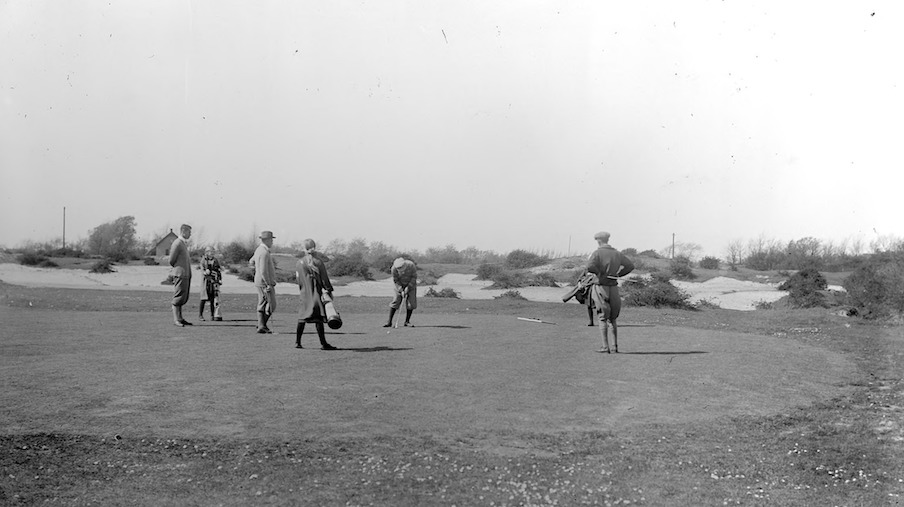 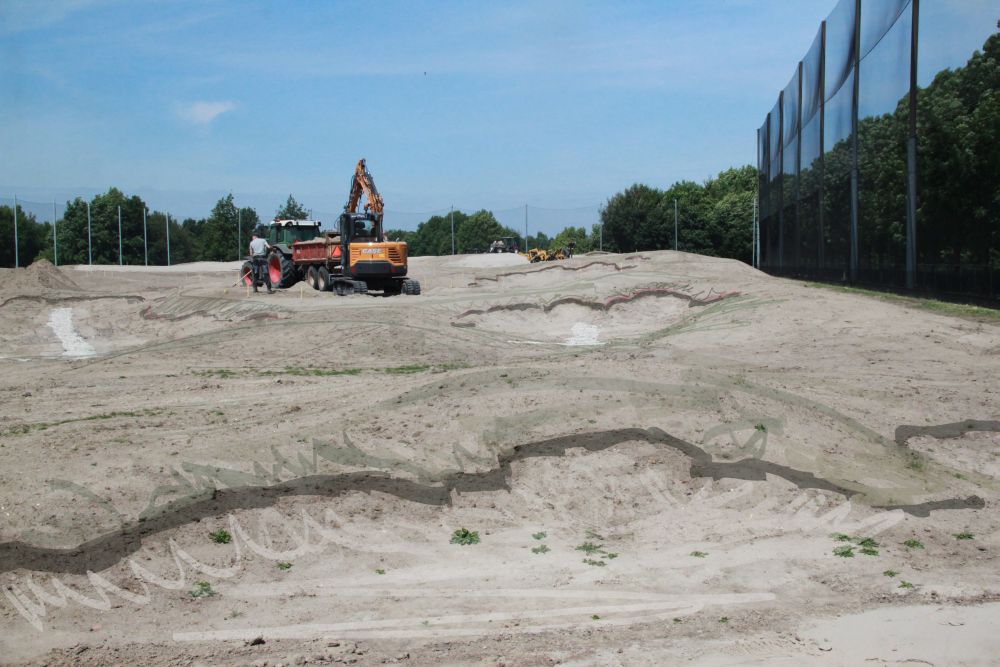 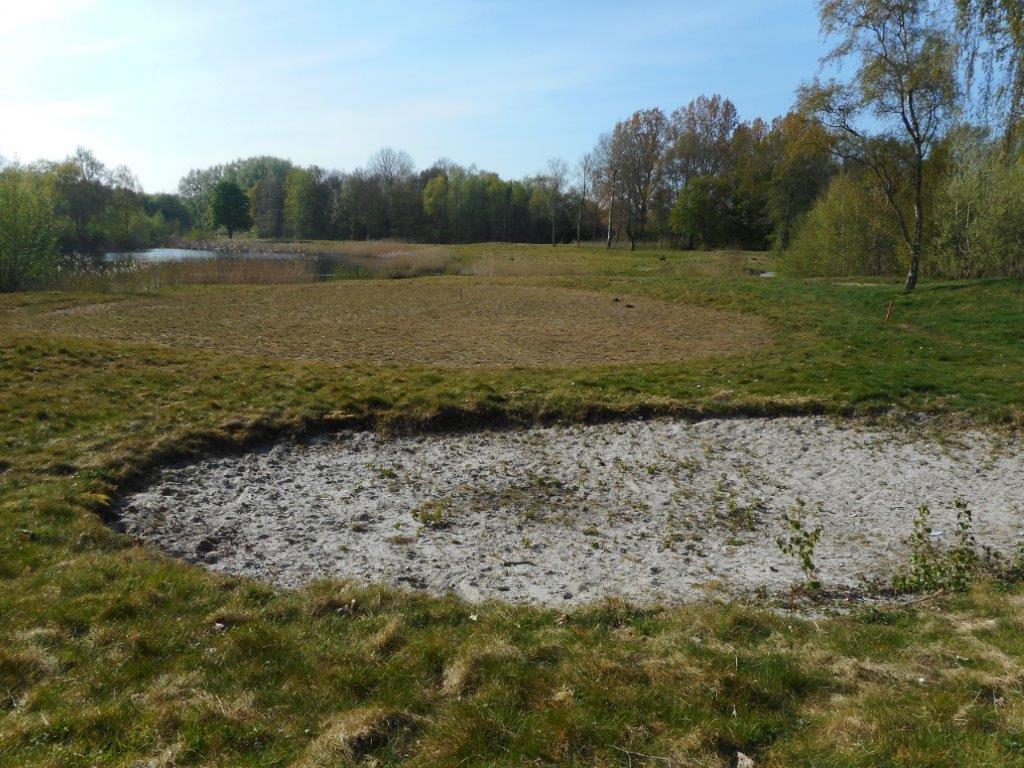 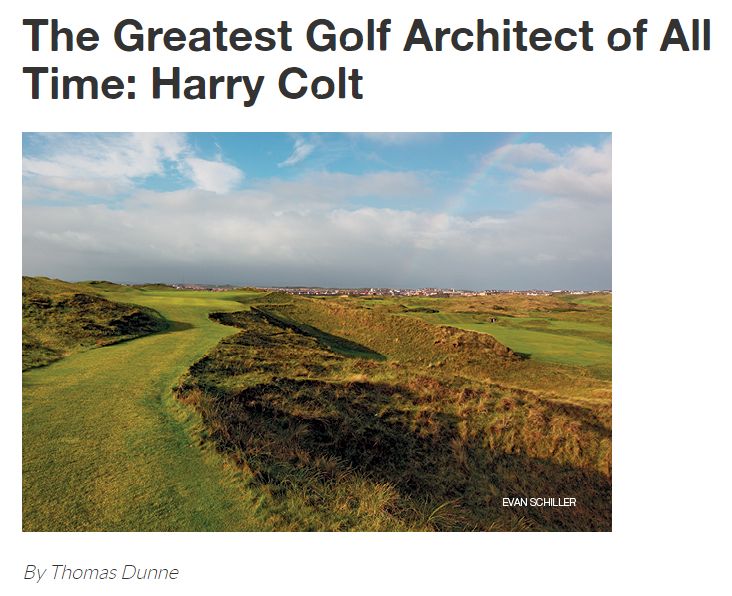 “In the 1920s and ’30s, Colt and Alison regularly crossed the English Channel to develop links on the North Sea coastlines of France (Le Touquet), Belgium (Royal Zoute), and Holland (Kennemer, Royal Hague). In the Dutch interior, Colt found a swath of Surrey-esque heathland at Utrechtse Golf Club. One highlight of that course, known as “de Pan,” is the superb short par-four 10th, which calls for an approach threaded between a pair of tall, scrub-covered mounds.” 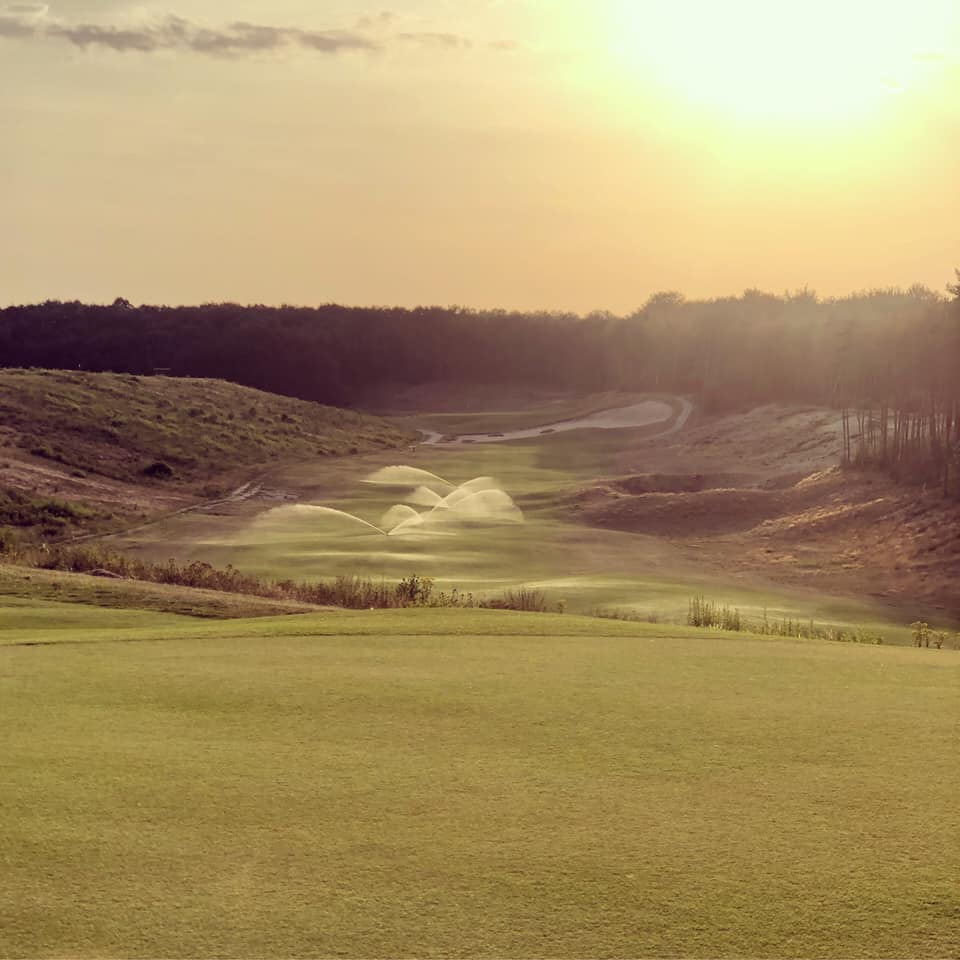